In this author interview we find out more about this recently published Network Meta-analysis, New generation antidepressants for depression in children and adolescents. Authors Dr. Sarah Hetrick and Nick Meader tell us about this work.

What were you trying to find out with this Network Meta-Analysis?

We were trying to find out how well newer generation antidepressants work compared with placebo and if some are more effective than others. We wanted to know how these antidepressants affect:

What is included in this review? 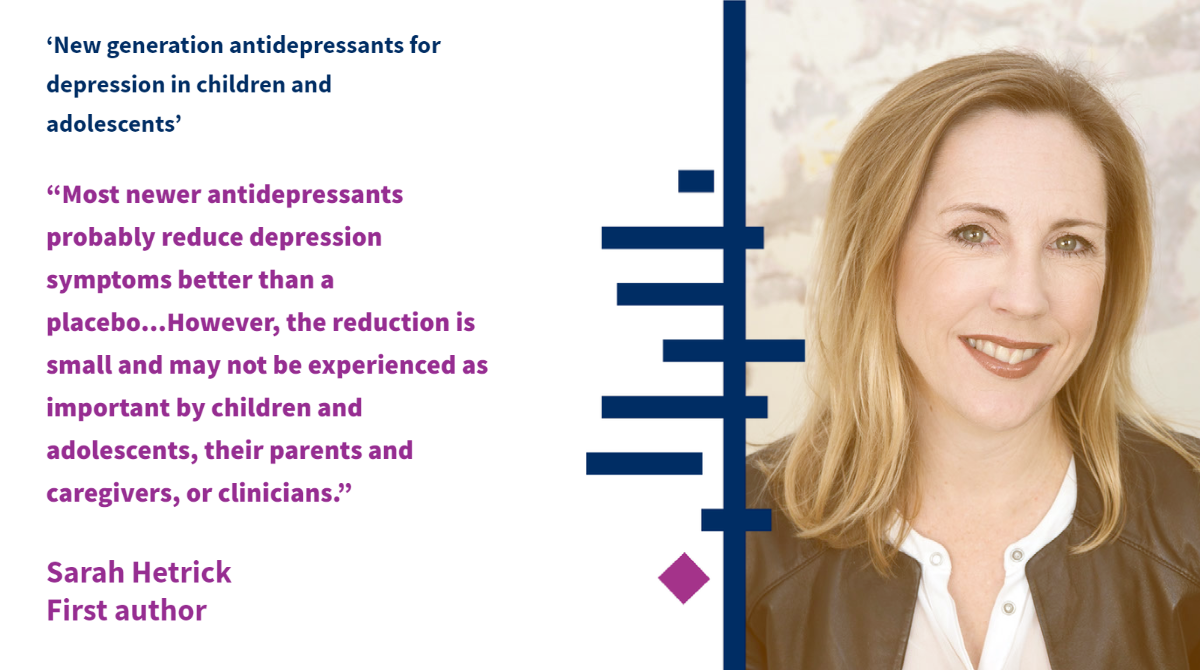 People who support young people with depression, including both family and informal supports as well as clinicians who provide therapy and those who are able to prescribe medication.

In summary, what does the evidence in this review tell us?

Most newer antidepressants probably reduce depression symptoms better than a placebo (a 'dummy' treatment that does not contain any medicine but looks identical to the medicine being tested). However, the reduction is small and may not be experienced as important by children and adolescents, their parents and caregivers, or clinicians. When different medications are compared against each other, there may be only small and unimportant differences between most of them for the reduction of symptoms.

Our findings reflect what happens on average to individuals, but some individuals may experience a greater response. It is also the case that some people may experience a small change as important. This might lead to recommendations being made for the use of antidepressants for some individuals in some circumstances. Our findings suggest that sertraline, escitalopram, duloxetine, and fluoxetine can be used if medication is being considered.

The evidence, as a whole, was limited. But for the effects of newer antidepressants on suicidal behaviour, there was even greater uncertainty. Firstly, children and young people at risk of suicide were often not included in these studies. So we can't be confident how newer antidepressants effect this group. Secondly, because suicidal behaviour is quite rare, future studies need to include more people before we can make firmer conclusions.

How will this impact guidance and existing guidelines?

Our findings suggest sertraline, escitalopram, duloxetine, as well as fluoxetine (which is currently the only treatment recommended for first-line prescribing) could be considered as a first option. This larger range of first line options is a new finding and has implications for existing guidelines. This is in the context of the above findings of the reduction in depression being small and our uncertainty about how this reduction will be experience (as important or not) by young people taking the medication.

Guideline recommendations vary. For example, in the UK, NICE has recommended since 2005 that if an antidepressant is prescribed for children or young people, it should be fluoxetine.

However, our systematic review suggests there may now be negligible differences between fluoxetine and a number of newer antidepressants such as sertraline, escitalopram, and duloxetine. So these new findings may have implications for guidance in the future.

But these are complex judgements. Guideline groups will ultimately have to weigh up whether this new evidence sufficiently changes the balance of benefits and risks to warrant a change in practice. Similarly, we don't yet know whether differences we have judged to be small and unimportant are perceived that way by young people prescribed these medications.

For a clinician or parent making a decision about treatment, it’s a complicated area, especially if risk of suicide is being considered. How can this help people making these decisions?

It is important that those considering medication (including young people, their parents/families, and clinicians) understand that they may only experience a small change in their depression as a result of medication. It is also important that they know that there are several medications that they could try. What is very important is that if they do decide to take one of these medications, the impact of medication on depression symptoms should be closely monitored by those prescribing the medication, especially as suicide-related thinking and behaviour may be increased in those taking these medications. Close monitoring of suicide-related behaviours is vital in those treated with new generation antidepressants.